Just thought I would share some of my favorite tim-ka (dotted-eighth sixteenth) songs for upper elementary.  My students have been LOVING these songs and games and that is not easy with this particular 6th grade group I have right now.  All of the songs have fun, but very different games, which keep the kids working hard during that particular "thinking" portion of the lesson (sight-reading, symbol recognition, diction games, etc) so that they can get to the movement game once the tough thinking is over- though many of the games, of course, also involve a lot of brain power with rhythm or solfa recognition, vocabulary, or even just remembering what certain game signals mean.

Who Stole My Chickens And My Hens-  This is a great (and tricky, once you get all the levels added in) concentric circle game (see picture for directions) with a fairly simple AABA rhythm (it uses only quarter note, quarter rest, and the tim-ka [dotted-eighth sixteenth] patterns).  I learned this game from Bruce Swank in my levels at Capital University in Columbus and it is a hit every year. (The picture for this song are from the Level 2 packet from Bruce- all other pictures in this post are from my personal Master Copy Retrievals). 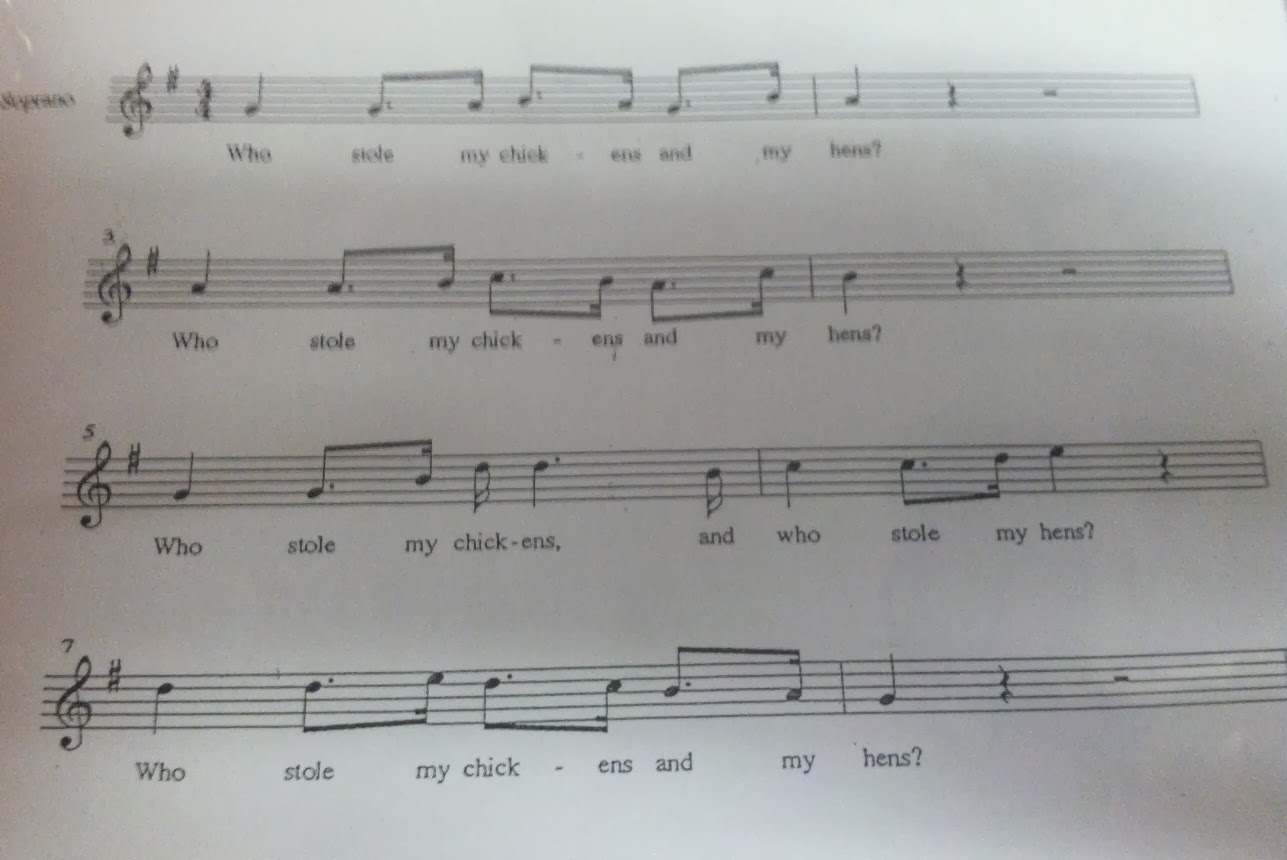 Rabbit and the Possum- While the subject matter is a little serious (a rabbit robbing a possum) we talk about anthropomorphism (giving human qualities to animals in stories) and why people might have written this song in the first place.  The students LOVE both versions of the game.  This one is much more complicated rhythmically (great for rhythmic dictation!) but I incorporate that into my "Version 2 Game".

Version 1 is played exactly like "Marco/ Polo."  One student is the 'Rabbit' and one is the 'Possum'.  The Rabbit is blindfolded and is trying to tag the possum- to find where the possum is in the room, the rabbit says "rabbit!" and the possum replies with "possum".  I usually play for 3 times through the song and if the possum is still not tagged, they win.
Version 2 of the game is played like "Steal the Bacon".  The students are split into two teams and each given a number (there is a '1' on both teams, '2' on both teams, etc.)  The teams stand on opposite sides of the room in a horizontal line facing in toward the  middle.  In the middle of the room is a small object for the teams to race to.  The whole class sings the song and when it ends, the teacher calls out a number, ex. 4.  At this time, the 4 from both teams races to the middle to retrieve the object and get it back to their side of the room before getting tagged by the member of the opposing team.  I have decided as an extension that instead of giving numbers out, I will give each student a rhythm card (with a rhythm from the song) that they will have to decode before they can run to the middle, so instead of calling a number at the end of the song, the teacher would call out a rhythm- eg tika-tika ti-ti tika-tika ta.  At the end, each team can work together to put the measures of the song in order. 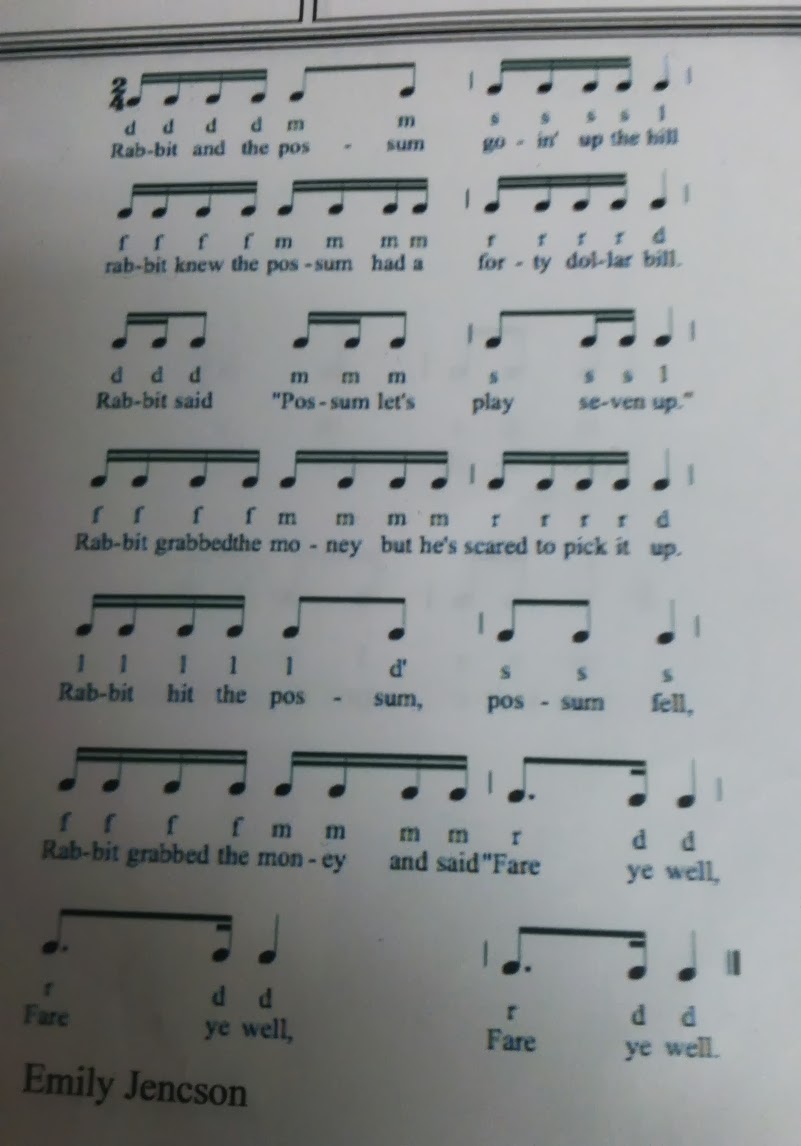 Chase the Squirrel-  I use this song as an introductory square dance song.  The only verses I have documented from a source are "Round Up Four and Chase the Squirrel" and "Break and Swing and Chase the Squirrel".  I have added verses such as "swing your corner", "promenade", "allemande", "do-si-do", "grand-right-and-left", always with a "Round up" verse in between going up to round up 8 and then back down to round up for.  Once they are used to the formation and the basic steps, I do a promenade your corner verse where the corner becomes the new partner.  This song is a great spring board into other square dances (which my 6th graders are really enjoying this year). 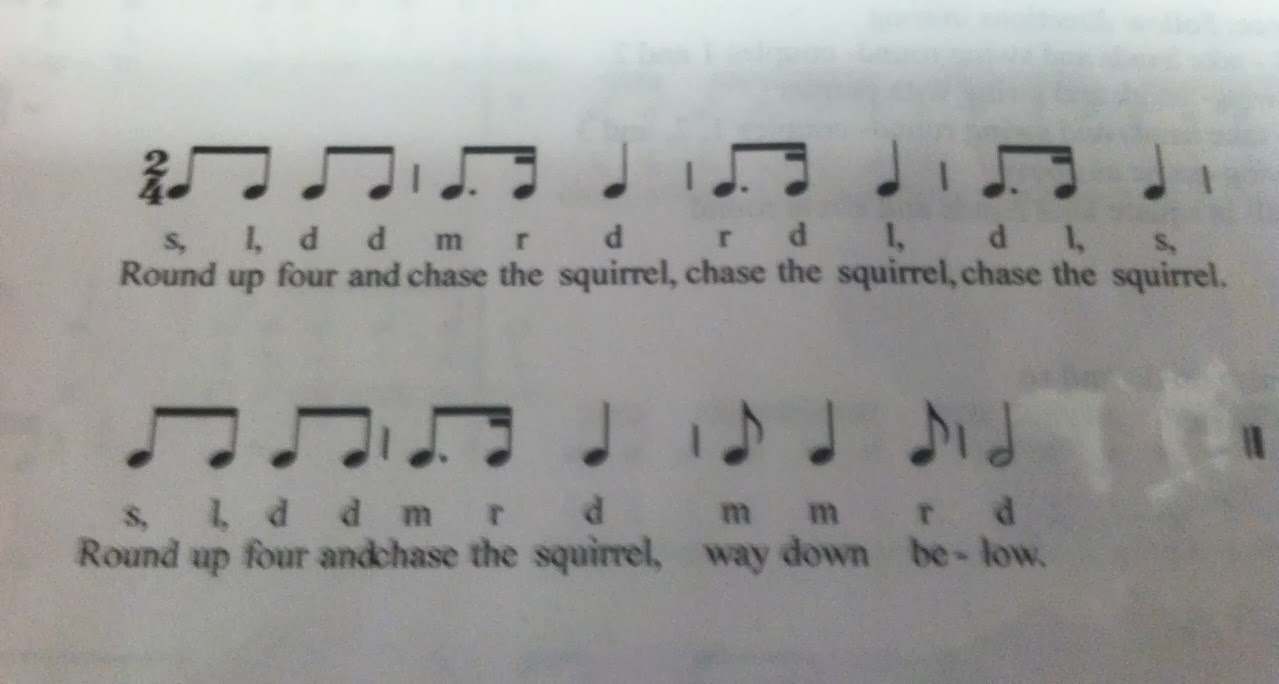 Sei Sei Sei- This is a Japanese song where the game is just Rock-Paper-Scissors at the end (they prep on ocha-laka and "shoot" on HOI! which the boys really like to yell) Sometimes I play as I was taught where each student has a piece of paper and every time they loose they fold their paper in half.  Once it is folded 4 times they are out.  That tends to take a while though, so I also do "single-elimination". 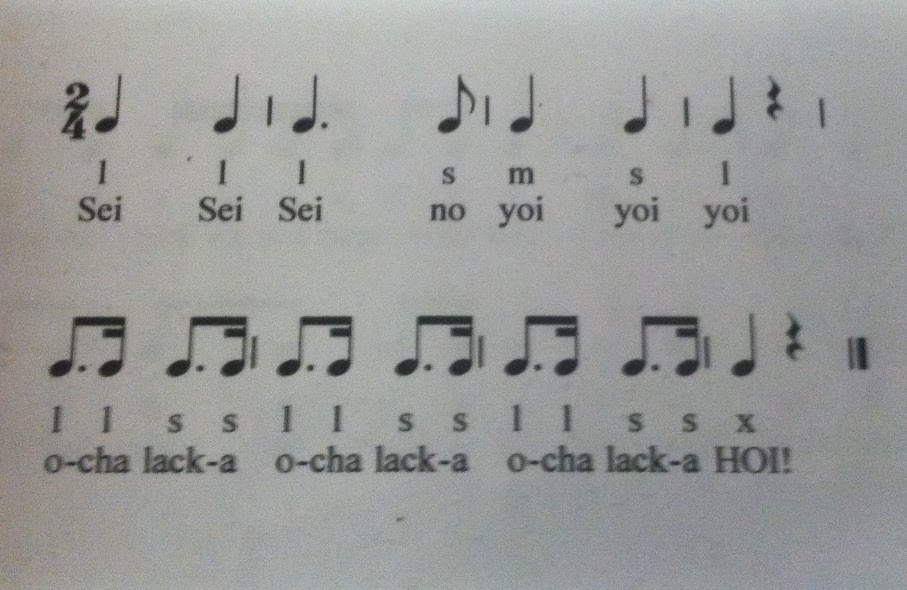 ps. I decided to wait until it feels more like spring to do my WHAT DOES THE FOX SAY lesson.  The post is mostly ready, so stay tuned for warmer weather and a fun post of lots of ideas that relate to this popular song.  For a second, I thought this song might be on it's way out, but then I heard staff members, 3rd graders, and 6th graders all mention it within the past week so I think they will still enjoy the lesson a lot.  :)   Also stay tuned for a Kids Reggae CD Giveaway!!!
Posted by Emily Jencson at 1:03 PM