Hungary Workshop 1- Even More Ideas from the Wonderful Lucinda Geoghegan!


While in Hungary, not only did I attend classes, but I also attended the International Kodaly Society Bi-Annual Conference.  I went to many workshops that gave me a LOT of great ideas for this year.

One of my favorite workshops was with the wonderful Lucinda Geoghegan who also taught my singing games class.  (See posts Here an Here to check out those games.)  She is so great that everything during her workshop was new ideas from the class.  Some ideas were "ah ha" moments, some were "how have I never thought of that?" moments and there were tons of new songs and ways to teach/ reinforce skills.

I decided to just list my 3 favorite ideas from this workshop.  No handout this time :( but I will do my best to describe everything in as much detail as possible.

1. LYCRA Have you ever wanted a parachute but either didn't have the space for it, or the funds to get one?  This was me until Lucinda's workshop.  She uses a big piece of Lycra (you can get it at any fabric store).  It stretches so a few, or a lot, of kids can use it at once and it is MUCH less expensive than a parachute.  I got my piece (a yard and a half) for about $20 which will be reimbursed by my PTA if I remember to turn my receipt in :)  It can do everything a parachute can do and you can get it in super fun colors or patterns to match your schools.  This was one of those "how have I never thought of that?" moments.

While the lycra was out Lucinda did a few things with it.  One was just moving the fabric back and forth to the beat while a stuffed animal "sits" in the center of it- he of course likes to JUMP at the end of a song on a rest for example).  In between repetitions she told one special student that the animal was talking to him and asked if the stuffed animal wanted to do the song again faster or slower.  This gives students choices within limitations- which is a great way to involve students without them taking over the class.

She also demonstrated high low un-conciously with the following game: coo coo cheery tree, can you change place with me (s-m-ss-m-ss-m-ss-m).  During the song the students moved the lycra up (on the so's) and down (on the mis) to the heartbeat. After each round the teacher would choose someone to change places with OR call groups (boys, girls, 7 year olds, people wearing sandals) to all switch.  You can also have a special student choose who to change with.

2. FEET - Lucinda had these great large rubber feet that she used to help demonstrate beat, or phrasing.  She had some in Red and some in Blue.  You could get more colors as you get in to pieces with more complicated forms.  She used them with Queen Queen Caroline (see words below) and the RED feet marked the beats in the A phrases, while the BLUE marked the feet in the B phrases.  Students can use them to walk along a "magic path" to the heartbeat of a song, or as they start to learn more difficult concepts, they can lay them out to match the form of the piece.  It was just a great visual and physical way to show the beat or form, aside from the letters or fruit that we typically write on the board. Great for inner-hearing too because students can sing the red feet out-loud while putting the blue inside their head, etc.  You could make them out of foam, or even just laminated construction paper. If you put velcro on the back they will stick to the carpet so kids can walk on them without them sliding all over. Or you can get the one pictured here.

To extend her Queen Queen Caroline Lucinda also changed the verse to King King Constantine at her signal (same chant, different name).  When Queen Caroline was around she loved polka dots so we painted the castle with spots to the beat, but when the King came around we showed phrases because he liked smooth lines.  Her signal was just "HERE COMES THE KING!!!!" 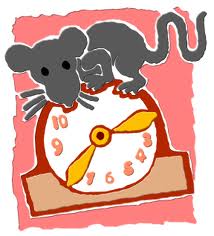 3. POLY-RHYTHMS- Even with the little ones Lucinda was already starting to do some 2/4 vs 6/8 work.  She taught Tick Tock (see below) and a simple hand clap game to that (clap own hands, hit partners hands, repeat) and then she taught hickory dickory dock with the same game.  As a challenge we stood in a circle and tried to do both at the same time (every other pair was a 2/4).  The different timbres (singing and speaking) helped us to stay on our own parts.  This is great to start prepping 6/8 un-conciously even with little ones.  They love the challenge of part-work!

A few gems to remember from Lucinda: Children don't always need the technical terms (especially the really little ones)- rather, they should experience concepts and get to be kids.  You can teach them the terms later.  Music should be taught from the inside out and children OF ALL AGES (yes, even middle and high-schoolers) should move and feel the music.
Posted by Emily Jencson at 3:03 PM