I have to admit- 6th grade has always been a challenge for me.  In my school, elementary is K-6 ( I teach 1-6) and by the time students get to 6th grade they are ready to leave.  That's why I was SO EXCITED when each time I taught my lesson last week a 6th grader stopped me to say "Hey- that was a really fun music lesson!" (Don't worry they learned too). Many of these activities were learned this summer in my Level 3 Kodaly Pedagogy Class at Capital University (thanks Joanne!) and I am so excited to try out more! I am going to copy a short version of the lesson below with all the songs, transition games, and everything below.  This is a 55 minute class.

I ALWAYS start with the students warming up.  They stand as if they are a choir and sing some songs from the lesson, not in order. This not only gets their voices warmed up a bit, but also gets some of the songs in their heads to prepare the subconsciously for mystery songs later.  This time they sang all the songs listed above except Liza Jane because that was the new song.

Al Citron: I had the rhythm and solfa written on the board like this (with no words and the dotted quarted- eighth written as ------ -):


The students took 15 seconds to read it in their head and then we sang it together out loud.  Once they figured out the song, we sang it on words, then rhythm, then words again as we moved to a circle to play the game.  They are still learning the game- which is passing the rhythmsticks to every other beat- but on Triki Triki- taping both sides of your knees before passing again (delaying passing by one measure).  Hopefully soon we will be able to make it faster and maybe add an elimination component.

*When students are out, have them choose an instrument to play the downbeats of the song to help with the passing and give them something to do! Idea from Brian Petit, 2012


After the game they all turned to the SMARTboard and we played KOOSHkwest with ------  - long short (what we are calling dotted quarter-eighth rhythms right now).  Students throw a koosh ball at the smart board and each circle has a rhythm attached- they read the rhythm that pops up.  If you have a SMARTboard and have never used this game go to SMARTexchange and look it up right now or email me!  The kids LOVE it!

We ended koosh rhythms on the rhythm ------ - ta ta and I asked the students to find that rhythm in my next song- Liza Jane.  Once they found it, we learned the words by me continuing to ask questions about the song- how many phrases total, how many DIFFERENT phrases, etc.  By the time I was done they knew the words.  I then gave them a preview of the hand clap game that goes with the song. 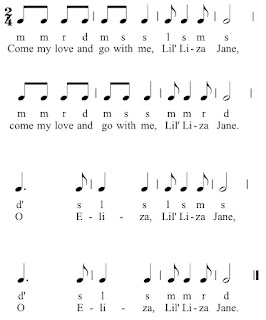 Game: Handjive Pattern learned from Bruce Swank who learned it from Rose Castleberry

While they were practicing the hand clap game, I changed the Liza Jane rhythm to the 2nd half of Our Old Sow.  They read the rhythm and figured out what song it was.  We then sang on words, rhythm, and figured out the solfege together to sing that as well.  We played the remote game where they start on words and when I hit a drum they switch to either rhythm or solfa syllables.  We did this 3 times, and then went to the fence game (which they LOVE) and played that 3 times. 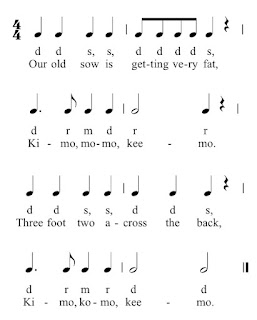 Class stands in several straight rows, all facing same direction with both hands on the shoulders of adjacent pupils.  (They are the fences.) At each rest, the whole group turns 90 degrees (switch from facing “front” to facing “side”.) During the singing of the song, sung at least 3 or 4 times, one pupil (farmer) attempts to tap the “old sow” who is moving among the class. Neither “farmer” or “sow” is allowed to duck under the arms of the class (fence).

Advanced: Instead of turning on rests, students turn when T. or chosen student taps drum.


After the game we turned to the solfa ladder and did some scale patterns (drm-rmf-mfs- etc) until we settled on the pattern for Ebeneezer Sneezer.  Some classes had time to add instruments (xylophones) to this- today just playing along with the notes were singing.  We have also done boomwhackers in the same way with this song.  We will soon be making up an accompaniment to go with it.

Next came S-L-M.  This is basically poison pattern. I loo a pattern and they sing it back on Solfa UNLESS my pattern has the notes s-l-m in it (salami)...   They love this game when they learn it in 2nd grade and I continually make it harder.  During the game I did the pattern dd-mm-ss-m a lot which led us to our final activity.

Haydn's 94th Symphony- Andante- the Surprise Symphony.  This is our listening example for the month.  We have listened to the song many times by now and have figured out the rhythm and solfa to most of the A section and will be looking at the rhythm of the B section next week. We have added a Tennis Ball activity to it where the students are in groups of 5 and they bounce the ball to each other in the pattern of a star.  They start with one tennis ball and if their group is successful, the can get all the way up to five.  They LOVE this activity.  They HAVE to bounce to every other beat to make it work.

Try out some of these Activities- or the whole lesson.  They were all a hit- which as I said, is rare for me in 6th grade!  More to come soon!  Have a great week!

Posted by Emily Jencson at 5:59 AM