Think Spring- Over in the Meadow Program

It may be December, but I am thinking Spring! I am so excited to be at a school that does Kinder programs and I am even more excited to have put together a program based on the song-tale Over in the Meadow. It is SO CUTE!

This is such an easy and fun program to put together because there are so many versions of the song out there.  I made sure that students were singing lots of animal songs throughout the year and then they got to vote on their favorites to piece the program together.  I had 3rd and 4th grade siblings singing the narration with the kinders chiming in each verse.

Songs we performed were:

Hello Song
Turtle- Tortoise from Carnival of the Animals- Scarf Routine
Fish- Aquarium from Carnival of the Animals- Finger Light Routine
Robin- Rockin' Robin - the original Bobby Day Recording- Plate Routine
Chipmunk- The Sycamore played by The Canadian Brass- Ribbon Routine
Bee- I'm Bringing Home a Baby Bumblebee
Beaver- The Beaver Song (I learned this one in Girl Scouts when I was little but there are many versions online!)
Frog- Frog in the Meadow and On a Log, Mr. Frog
Lizard- The Lizard Song - It can be found on Youtube HERE.  I emailed the composer and got permission to sing the song in our program- he said he never actually wrote it down though.
Duck- Alle Meine Entchen (All the Little Ducklings) - we sang in both English and German!
Rabbit- The Bunny Hop Dance!

We also learned other songs throughout the year that matched other animals commonly in the Over in the Meadow song.  We learned Spider Songs, an Owl Flashlight Routine, another Owl Song, Fox Songs, Bird Songs and more!

The stage was super easy to decorate. I made lots of paper flowers and hung them up- easy peasy. Costumes were also super simple, as kids just wore their spring best! 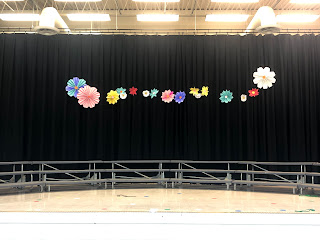 If you want the routines I used, program templates, packs to teach some of the songs, and more- check out the program on TPT.  Or feel free to just use the ideas mentioned and make up your own!

Get the program starter pack HERE! There are 4 song packs, 4 routines, programs, and ideas for over 15 animals all included!