I was on Facebook this wonderful spring break and an old college acquaintance, Haley, was tagged in a video titled "Diva Tag." Intrigued, I clicked on the video and saw 5 people (Haley, Clara, John, Kyle, and Matthew) standing around a piano. One of the five friends not only played the game, but played the accompaniment as well.  Clara started singing and when she felt like it, she tagged one of the guys and he took over singing the song.  This went on for the whole song. Sometimes the friends were tagged in logical places, such as at the end of a phrase, and sometimes in more surprising spots like the middle of a long note.  It was very fun to watch and I got to thinking that it would be a great game for choruses to play when they have learned a song really well. (It could also be played in general music, if there is a song long enough.)

To play in a classroom setting, students could break into groups of 5 or 6, and for my kiddos the groups would be students all on the same part.  Each group would stand in a circle and designate someone to start.  All groups would be singing at the same time, so students would feel safe knowing that while they are the only in their group singing, there are others around the room singing with them.  I would make the rule that the tags need to travel around the circle until everyone has had one turn, then students can tap whomever they want.  I wold also say "no tag backs" :) Once students are comfortable with the game, the teacher can use this as an assessment tool to hear singers individually. This game is not only a fun way to practice songs, but it practices inner hearing, and encourages students to listen to the other singers around them. I can't wait to try it next week when I am back at school! Thanks Haley and Co. for the great idea! 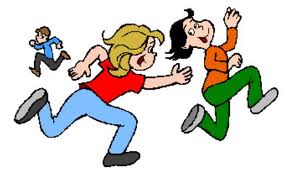 I couldn't find Haley's video on YouTube, but here is a similar video with 3 people at what looks like a karaoke night or a comedy club in NYC (be careful if you decide to show this in class and be sure the comments are hidden as there are some inappropriate words) http://m.youtube.com/watch?v=n8FgsetMkHs
Posted by Emily Jencson at 8:09 PM